In almost every FTC game, a system for transport is necessary to place one game element into a higher one. This was seen by putting the balls into rolling goals, putting blocks into crates, putting rings onto a stand, etc. It is important to understand possible ways to raise game elements so you can pick the right one for a certain situation.

An arm is the simplest to make out of all lifting mechanisms. It uses an arm, which can be made out of a variety of materials, like a C-Channel, on a pivot, which transfers an element from one area to another. Arms can be quite common in FTC; they are easy to build and can be quick. However, there are a couple of issues with arms. For one, the center of mass changes for the robot when the arm swings; this can lead to toppling if the robot is not stable. Furthermore, in general, it is difficult for arms to reach higher heights. Arms also do not have the ability to minutely change their height so they can adjust. The arm swings along a fixed path, so it can be difficult to score if there are minute differences in height. An example of this would be block scoring on the pendulum in Block Party; the pendulum was swinging and changing height, so it could potentially be awkward for the arm to score if the height differences are not accounted for when built.

Linear slides are the most commonly seen lifting mechanism in FTC. It is composed of various slides that are pulled on by a string or wire, attached to a spool powered by a motor. Linear slides have the advantage of finite control of height. It also can raise to higher heights than an arm can.

The idea of linear slides is to have multiple stages that lift to different levels. Each level is attached to a piece that holds a bearing; this is what the string goes through. When the pulley rotates, the string tightens, which then pulls up the linear slides in stages along with it.

There are various options which you can use for linear slides.

80-20 is a very effective option to use for slides. 80-20 is very robust and strong; it is not liable to break or wobble at all, even at high heights. Even so, 80-20 has its drawbacks. It is heavier than other options and it also stacks on each other, taking up a lot space.

Drawer Slides are also another option. Depending on the drawer slide that you choose, they can be heavy or light. In general, they take up a lot less space than 80-20 because they are a lot thinner. However, they tend to wobble a lot at higher heights, unless you double them up with slides on both sides.

An example of drawer slides working can be seen in this video by Vulcan Robotics: https://www.youtube.com/watch?v=mreE2uoC4MU

There are many other linear slides that can be used in FTC. For example, our team utilized Misumi slides, which were lightweight aluminum slides that would not take up a lot of space in the robot. Feel free to explore other options that may not be listed that would be more effective for a certain situation.

Scissor Lifts are another option for raising objects. They are very commonly seen in the real world, but not as much in FTC. While scissor lifts accomplish similar things that the slides do, they also have several drawbacks. At higher heights, scissor lifts have potential to bend and tip; this was seen during the Bowled Over Season. It is also quite difficult to work with, since getting fingers caught in there is not fun. 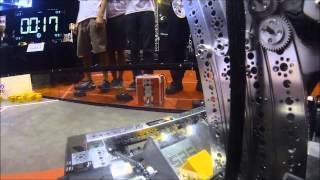 Eagles Robotics Xperience came out with a very successful rack and pinion design; they cut C-Channels in half to make the system very compact and sturdy.