Drivetrains are an integral part of having a successful robot. Even if one has the world’s best scoring mechanism, without a drivetrain that is stable and consistent, the scoring mechanism cannot achieve the same efficiency.

There are several ways to transfer power from motors to wheels. In general, the ways are directly from the motor to wheels, using gears, and using chain. 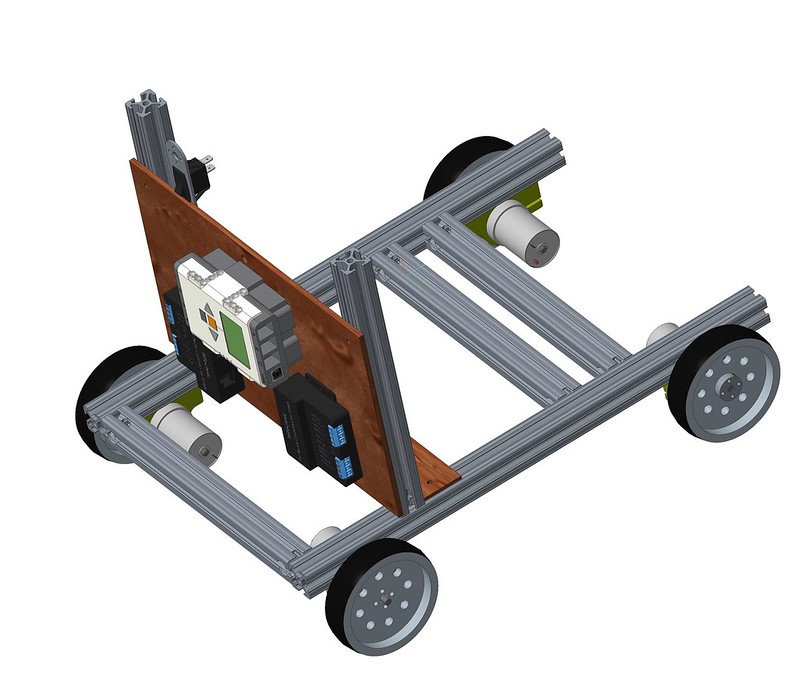 Gears can also be utilized to transfer power. Gears do not put pressure on the motor shafts. However after continual use, gears can strip and leading to grinding of gears of even skipping teeth, so the power will not be transferred. In other words, be weary of gears and make sure they do not get worn out.

Chain can power wheels using sprockets. Sprockets are generally the most effective in transferring power because it does not run into the problems that gears and direct power do. It can also allow the motor to be placed at a greater distance away from the wheel, allowing for more liberty of how the drive train can be designed.

The most common drivetrain is the tank drive. The tank drive utilizes standard wheels that are placed at the corners and/or center of the sides of the robot. There are several different options with the tank drive and several different designs, such as 4 wheels, 6 wheels, 8 wheels, having omni wheels in place of tank wheels for easier turning, and many more. There are also variations of tank drive, such as West Coast drive, which has the middle wheel lowered ¼” in comparison to other wheels, allowing for a smoother turning. Tank drive is easy to build, and can be used quite effectively to push other robots due to greater traction. However, it is not as maneuverable as holonomic drivetrains and can be more difficult to adjust and turn.

A successful tread design was used by team 5975 Cybots during the season Cascade Effect!

One example of a holonomic drivetrain is the mecanum drive. The mecanum drivetrain utilizes 4 mecanum wheels that are placed in tank drive position. Mecanum wheels have rollers that allow for side to side, forward and backward, and diagonal movement. Unlike omni, mecanum wheels allow for 70 percent pushing power forward and 30 percent pushing power to the side. This is useful for playing defense or getting up obstacles. While it does have more traction than omni and a less even power distribution, mecanum is more prone to slipping or being pushed than tank drive.

There are several available mecanum wheels that FTC teams can use.

Andymark Mecanum Wheels- These are made so they have the tetrix hub hole pattern drilled onto the wheel. However, they are very low traction, brake easily, and are difficult to strafe well with. Not recommended.

VEX 4” Wheels- VEX wheels are much better quality than Andymark Mecanum wheels; they allow for easier strafing. However, they do not have the tetrix hub pattern on the wheel, so they have to be drilled or have a custom adaptor made to adjust to the tetrix hub. Furthermore, they are not extremely strong; they will break under the pressure of heavier FTC robots. Not recommended.

VEX Pro 4” Wheels- Like the normal VEX mecanum wheels, the VEX Pros do not have the standard tetrix hub pattern, so an adaptor to the tetrix hub will have to be made separately. VEX Pro wheels have a greater weight support than the standard VEX wheels, being able to support even the heaviest of FTC robots. However, they have a lot of difficulty strafing, because of their minimal surface area with touching the ground. Not recommended.

Robotshop – Robotshop mecanum wheels are the best mecanum wheels that we have experimented with. Once again, an adaptor needs to be made to connect to the tetrix hub pattern. However, these wheels are sturdy enough to support heavy robots. They also allow for fantastic strafing due to a large surface area of the wheel hitting the ground. However, they are quite expensive to buy. Even so, they are recommended.

Another example of a holonomic drive is the omni drive. The omni drive uses 4 sets of omni wheels (usually 2 wheels per set attached to each other) placed on perpendicular lines. With rollers on the sides of the wheels, omni wheels have the ability to move in any direction with ease. It is slightly better than mecanum in terms of maneuverability. Also, since the wheels are placed at 45 degree angles, each side could be considered the front and can be used as such. However, omni often has difficulty maneuvering over obstacles because of low traction and split force vectors. It also means it is difficult to play defense with and easy to play defense against. Furthermore, the placement of the wheels cut into the center of the robot, potentially taking up more space.

For these drawbacks, omni is now becoming less common and successful in ftc, although some teams still manage to do well with them. An example of a good omni drive can be seen from many robots by team 4220 Landroids during the Get Over It!, Bowled Over!, and Ring it Up! games.

Swerve drive is a variation of a holonomic drivetrain. Like holonomic drives, it can move in any direction; however, it utilizes tank wheels to do so. The tank wheels are able to swivel around and move in any direction, much like a rolling chair. A problem with this drive is that it is complicated to make and often uses many servos or motors to work.

An example of a team that has successfully used the swerve drive is team 7013 Hot Wired, who won the world championship during the Block Party! season.

With all the possible drivetrains, keep in mind that the most successful drivetrain is often the simplest. The drivetrain is critical and is the base of the robot that teams will have to rely on the entire season. Drivetrains must be sturdy and when they break, must be easy to repair.